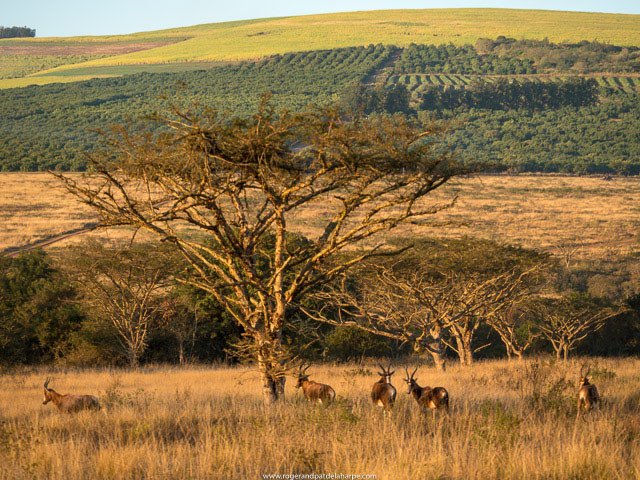 The period under review culminated in the 3rd Fountainhill Estate (FHE) Research Symposium, a symposium that in my mind surpassed the previous symposia, in the calibre of presentation as well as the relevance of papers and practical applications resulting from it. In total 35 papers were presented.

One of the most important outcomes of the symposium has been the observation that it needs to become a stimulus for guiding future research, highlighting the need for integration and directed collaboration between the multi-faceted disciplines, as well as providing the basis for practical solutions. These management recommendations need to be disseminated beyond the delegates attending the symposium. In attempting to tie this into a working approach a workshop to synthesise the proceedings needs to assimilate conclusions, findings and recommendations resulting from the presentations, providing guidance and facilitation of multi-, intra-, and inter-disciplinary approaches for identified research directions and finally to facilitate the dissemination of practical information. This group will probably comprise members of staff, academics from UKZN and Rhodes and possibly from the directors/coordinators of similar symposia, so as to gain similar benefits from a wider knowledge base.

Preliminary work has already been concluded to highlight research priorities. This will be discussed at the Taeuber Management Trust (TMT) Board meeting and then with academia in an attempt to fill this knowledge gap.

Our work to document the biodiversity of species resident on Fountainhill Estate (FHE) and within the Central Umgeni Conservancy (CUC), continues and the environmental audit lists now boast 331 bird species, 484 indigenous plants, 221 indigenous trees, 29 grasses, 33 mammals, 10 reptiles, 18 frog species (survey not completed) and in excess of 86 butterfly species. This work continues and we are awaiting a list of macro-invertebrates and fish species found in our rivers and streams. It should also be supplemented by the work being conducted by Conservation Outcomes and SANBI in consideration of a protected Biodiversity Stewardship area.

There are some exiting developments with regard to the conservation corridor which was initiated through the establishment of CUC and now the consideration of a more formal Biodiversity Stewardship programme. These include the initiation of discussions with the community leadership of the area downstream of the CUC properties to Nagle Dam and the Msinsi managed resort there. This work is being conducted by the INR, recently appointed as the facilitator of a programme under the ambit of the UN Global Environmental Facility 6 (GEF 6). This area comprises in excess of 25,000ha and has other upstream linkages, of environmental importance such as the uMkhabela catchment, where the rehabilitation of a major wetland is currently being undertaken by Holley Bros. This network of corridors and catchments will prove vital in establishing contiguous conservation corridors, as well as securing the strategically important water resources of the province.

FHE continues to play a role in community development initiatives, other than those already mentioned. The steering committee for the reintroduction of the Cape Vulture, the availing of the property as a research facility and in the Environmental Awareness & Education (EAE) programme. Further to this, preliminary plans are underway to convert the former homestead of Ernst & June Taeuber into the Greenhill Centre for Biodiversity. A further facility providing a venue for Board and Corporate meetings, accommodation and equipped offices for visiting researchers. It is envisaged to become a focal centre for combined efforts in biodiversity protection and related research.

At grassroots level the EAE programme is now well into the first phase. This collaborative project between FHE and uMshwati Municipality has now hosted 2 groups of disadvantaged primary school pupils to an ‘’Introduction to the Environment”; during which groups of 10 to 15 students are taken on a 1-2 hour walk through the conservation area, among the wild animals and indigenous fauna. They are instructed on the inter-relationships within nature and the importance of clean and healthy environments for society and the resources we need.  Four different school groups are to be hosted annually. This visit is followed by environmental projects as part of the school curriculum, overseen by their educators. The students with the best project are selected to return to FHE for a full bush experience including mini-SASS demonstrations on river health and water quality. Thus 4 students from each of the participating schools. A final selection of the most enthusiastic students qualifies them to enter into a structured and accredited environmental curriculum hosted by WESSA. These training structures can eventually lead into careers within conservation and the environment. The WESSA courses come at a cost, and Corporate donors will be sought to adopt the candidates selected to embark on this training.

Other training and awareness programmes include nature trails under the leadership of external contractors and school or club groups embarking on bush experiences.

Free Me have conducted one of their training camps, with the Rangers Hut as a base, for junior custodians of the environment, from their Environmental Outreach Clubs. WESSA, is still in the process of finalising plans to use FHE as a site for satellite environmental training initiatives and as a locale for the prestigious President’s Hike assessments.

FHE still requires much by way of conservation management to return it to a state resembling the original ecology of the area. Prime among these problems are alien invasive weeds and encroachment of woody species into the more natural, and desired open grassland that occurred prior to poor cropping and rangeland practices led to the current state of degradation. We are under no illusion that this is a quick-fix. It will take many years of improved management and correct stocking rates to improve the situation. The vegetation transects implemented four years ago are still being monitored to assess species composition, and are being expanded to be more representative of the overall vegetative profile of the property, i.e. including woodland and thicket assessments. This is being undertaken under the guidance and counsel of Mr. Cobus Botha of the Bio-resource Unit of the Department of Agriculture at Cedara. Some invaluable guidance has already been provided in this regard.

In conjunction with the work of Cobus Botha, his colleague Kurt Barichievy, of the same unit, has initiated detailed soil mapping of the property, which uniquely houses 4 different biomes.

The results of these studies will assist in the drafting of a Game & Rangeland Management Protocol aimed at reversing the degradation of previous poor practices.

Game numbers remain stable but indications are that bulk grazers need to be increased, relative to selective grazers and browsers (at < 2m) need to be reduced. Actions will be implemented once follow-up inspections have been conducted during Nov/Dec’18.

The possibility exists to integrate this work with the findings of the commissioned study on the Water Resources of FHE, undertaken by SRK Consulting under the leadership of Prof Simon Lorentz. This study assessed the surface and sub-surface water resources and recharge rates as well as run-off, using the ACRU model developed by the Hydrology Department at UKZN. Similarly results from research, being hosted on FHE, such as that undertaken by Erin Ueckermann and Gugu Tshabalala will further inform this document. Currently, a water balance model is being developed as a management tool, and monitoring equipment is being installed to determine inflows, storage volume, water quality, usage and outflows.

The “Public-Private Partnership” (PPP) with the Department of Environmental Affairs (DEA), aimed at combating alien invaders continues to make inroads into the control of alien invasives, in the conservancy. Presently, 7 Working on Water EPWP teams, as well as two specialised High-Altitude Teams, from Working on Fire, working in remote and inaccessible areas are engaged in clearing of alien weeds, on the conservancy. During the first 12-month period this PPP resulted in a joint investment of R1,358m into the control of alien weeds, providing an equivalent of 31 full-time employment opportunities for that period.

The web page has now been launched and is accessible at http://fountainhill.co.za . Unfortunately, it is proving very difficult to completely shut down older versions of the web page, but over time these should fall into disuse.

The well distributed rains of 2017 have continued into 2018 resulting in continued yield improvements in the sugar crop, and are having a beneficial impact on the avocado crop for 2019.

Numerous sustainability projects have been initiated and will be expanded. These include precision herbicide application – resulting in more judicious application of chemicals and a much reduced usage of fossil fuel; energy reduction efforts in the staff village are being researched; rain water harvesting has been implemented – with water collected being used in wash-bay facilities, cisterns in ablution blocks, game watering and staff vegetable plots; the careful monitoring of water balances and judicious irrigation practices are resulting in water saving; improved accuracy and adjustments relative to soil analyses and crop removal are included in calculating crop nutrition requirements and should reduce excesses leaching into water systems; a recycling project has been initiated; protection of wetlands is a priority and finally there are the efforts at protecting and enhancing biodiversity within a protected corridor.